"That boy is working so hard to keep anyone from worrying about him, he's twisted into bits. Don't take him for granted."
―Abeline to Walker about August[src]

August Walker is one of the main characters on The CW crime drama series, Walker.

He is Fourteen years old, sweet, sincere, and quietly smart, August is Walker’s son. He rabidly consumes information and is eager to learn any skill that will help, please, and impress his family. Unlike his sister, he doesn’t want to cause a stir. In other words, a time bomb.

August Walker is the youngest child of Cordell and Emily Walker, and the younger brother of Stella Walker. Born and raised in Austin, Texas, his creativity and keen eye for photography helped bring him closer to his mother, who shared his love of the arts. He had a happy childhood and life, until his mother's unexpected murder. His father, a notorious Texas Ranger, accepted an undercover assignment that took him away from his children for ten months. In his father's absence, August and his sister moved in with their grandparents, Bonham and Abeline. His uncle, Liam, moved back to Austin with his fiance, which allowed August to form a closer bond with him.

In Pilot, eleven months after the death of Emily, the Walker family gathers for Cordell’s anticipated return. August is certain Walker is coming, but Stella sarcastically shoots the idea down. Larry asks if Liam has heard from Walker but he hasn’t, but wonders if he knows his old partner is his new boss. A truck drives up but it isn’t Walker, much to August and Stella’s disappointment.

The next morning, Cordell arrives at the Walker ranch. August runs up to hug his father, who remarks on his growth. Liam greets him moments later and they hug before playfully wrestling until their mother yells at them to stop. Everyone hurries to finish their morning routines with August grabbing his lunch to leave for school. At dinner, August tells his father that he has started using his mother's old camera as he's interested in photography. Cordell thinks that's great.

Abeline warns Cordell the next day, that August is good but not to take him for granted. She thinks Walker needs to be here with his parents and recommends moving into the farmhouse on the edge of the property. He realizes that she’s already refurbished it and prepared the home. He tells her about the job opportunity to be in a task force, though August walks in before Cordell can explain. He wants to show his father the farmhouse. Unbeknownst to Walker, Stella overheard his conversation with Abeline.

Walker and August visit the farmhouse and Walker hallucinates a smiling Emily surrounded by warm light. August shows Cordell the farmhouse, including a table he recently refinished. Walker is proud of him. He then apologies for making him shoulder a lot and forcing him to grow up so fast. August asks if they can sleep out here tonight, which Walker is happy to do. August falls asleep on the couch.

In Back in The Saddle, it’s morning in the Walker ranch, with Bonham teaching August how to use a leather kit, Abeline quipping on his lack of organization, and Liam making a smoothie for Stella. Walker tries to keep up with the family’s new pace but finds himself a step behind. He disagrees with Abeline’s encouragement to live in the farmhouse, as she thinks the children need stability while he thinks they need to get back to normal. Stella wonders if Walker ever thinks about where she and August want to live. Liam and Stella leave for school, while August assures his father that Stella gets like this sometimes and even goes to their old house sometimes. He’s fine anywhere his dad is. Walker appreciates the sentiment but has to leave for work, with August needing to work on his project before school.

At school, August meets Ruby, who runs the AV Club at Sacred Heart High. She offers to help him with his "What Austin Means to Me" project so they can make his mother proud. At home, August walks to the fence with his camera and remembers his mom teaching him about the camera and photography. Abeline watches him from afar and confides in Bonham about her worries over August.

That night, August witnesses a heated fight between Liam and Cordell over the custody battle that took place while Cordell was undercover. Cordell was unaware of Liam's filing for custody, though the fight escalates to Emily's death and Cordell still wonders what the poker chip that Emily had on her means. Cordell finds August on the steps of the farmhouse with a box, which August gives his father. It was supposed to be a gift from Emily for fathers day - a poker set. She carried a chip with her to show everyone the chips. Cordell pulls the chip out of his pocket and puts it in the column where it matches perfectly. Cordell apologizes for his actions while August assures him they’ll figure it out.

Cordell goes into the farmhouse where Stella and August are watching his project. It starts with what Emily recorded and includes montages of them as a family starting from when they were children. The family watches it together as Cordell remembers the day they made the kids’ handprints on the slab, which turned into a hose fight between them. As he watches the video he becomes emotional, but can’t help but smile at the memories.

In Bobble Head, August and Stella walk to school together, with him pretending to be a Safari voiceover person. He compares the students around them to different animals and their nature-based behaviors. They are stopped by two girls who invite Stella to the bonfire but she doesn’t think it’s a good idea with her court date. She also doesn’t want to ask her dad for help as they’re finally on good terms. The group disperses but Ruby appears to ask August if he’s attending the bonfire, which he brushes off as if it is not his thing. Upon seeing her disappointment and learning that she will be attending, he changes his mind and agrees to go. She reminds him that Freshmans have to bring a bottle of booze.

Abeline serves the steaks that Hoyt brought and slaps August’s hand when he tries to eat before grace. Hoyt is picked to say grace which Bonham initially disapproves of his approach. Liam asks what brings Hoyt to town, but he claims it’s just to see Cordell. Abeline asks about his oil job but it dried out. He explains his recent jobs and locations, with August being in awe. Liam and Cordell ask about other locations that are prisons. Hoyt mentions that he isn’t the only outlaw in the family, giving a pointed look to Stella. Bonham bangs his hand on the table then excuses himself to eat in the bunkhouse. Once he’s gone, Hoyt asks Stella about the bonfire as Emily started it back in high school.

At the bonfire the next night, Stella notices August, who is drunk and dancing embarrassingly. He begins to breakdance as Stella watches and notes that he’s risking extinction. She stops August from walking across hot coals which he wants to do to impress Ruby. Stella pulls him aside and notices that he stole Grandpa’s liquor, which he retorts if she’s trying to drive their dad away by acting out and breaking the law. He asks if she’s trying to make him leave again, but she asks him not to say that. Before he can continue he begins to vomit while she pats his back. She tries to call Cordell but he doesn’t answer, so she opts to call Liam instead. She tells him that August is drunk and vomiting, as they’re stranded at the bonfire over by Shaughnessy.

Liam and Stella load August into the car. She apologizes for ruining their night but Lim assures her that she can always count on him. August is elated by the number of cakes in the back seat while Stella wants to know if Liam will be in court tomorrow. He can’t be there but assures her that she’ll be fine. Once in the car, August puts on the radio and finds a station playing decent music. He drums on the back of the car seats until everyone begins to sing and drum along.

The next morning is Stella's hearing for her possession charge. Cordell wakes a sleeping August by hitting him with a pillow playfully, much to August's chagrin. That afternoon, the Walker’s leave the courthouse with Stella upset as she apologizes for what happened. Cordell tells her to face the music as they can’t change what happened. She will work off the fine, but she quips back if that’s before her 100-hours of community service or after her license gets suspended. August snorts at this so he and Cordell exchange “yeah’s” before they get in the car. He pulls over and tells everyone to get out. He tells Stella to get inside as he’ll teach her to drive stick while she has her license for one more day. August, on the other hand, will sweat out his hangover while he and Stella serve as his pace car. Cordell begins to show Stella how to operate the stick shift, which she understands pretty well. August realizes they’re driving and begins to jog beside it. Stella asks what the car's name is, but Cordell merely smiles as he places the bobblehead on the dash and glances over at August who is jogging to keep up with them.

In Don't Fence Me In,

August (to Trevor about being cooler to get Ruby to like him): "What's the point in doing it if it's not the real me?" 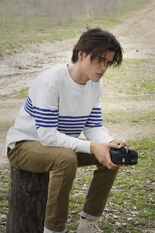