"You've reached Emily Walker, I'm probably off trying to save the world or something."
―Emily's voicemail[src]

Emily Walker is a guest character on The CW crime drama series, Walker. She is portrayed by Genevieve Padalecki.

She was the late wife of Cordell Walker and the mother of Stella and August Walker. She is Cordell Walker’s strong, capable and generous late wife who is brave and focused on helping the disenfranchised. Appearing in flashbacks, Emily is a grounded and authentic hero in the Walker family. The mysterious circumstances surrounding her sudden death becomes a focal point for Cordell upon his return to Austin, Texas.

Emily had a happy life as the wife of Texas Ranger Cordell Walker, and the mother of their children Stella and August. Her desire to help people led her to befriend Geri Broussard, and together, they would take supplies to stations in the desert. She tried to do her part to make the world a better place, while expertly juggling her family. Everything changed on April 8, when Emily called Cordell in a panic. She ran through the woods and told him that something was wrong. Before she could explain, two gunshots sounded followed by her scream. She fell to the ground and bled out while Cordell frantically tried to call her back. Emily died that night, though the circumstances surrounding her murder remained a focal point for Cordell. Several things about the night she died didn't line up in his mind, starting with a singular poker chip he found in her possession, and the fact her eyes were closed as if someone laid her to rest. He also didn't believe that confessed killer Carlos Mendoza was responsible, though Walker's partner Larry James and brother Liam Walker were insistent on closing the case.

In Pilot, Emily first appears in a flashback. She meets with her husband, Cordell, in the long driveway leading to their house. She asks if he caught his guy, which he did, of course, asking if she’s heading out already. She has to meet with Geri. They kiss and he ensures she’s going on the approved route, with her telling him not to worry. She tells him to go on up to the house for game night, though he still isn’t sure about the rules of the game. She assures him that they just want to see him, though teases him about losing the game. They kiss again telling one another to be safe. Later that night, Walker’s phone chimes with an SOS message from Emily, so he excuses himself to call her back. She runs while talking to him as she claims something isn’t right. She doesn’t get the chance to explain as two gunshots ring out followed by her scream. The line goes dead. Walker goes outside to try and reach her. He doesn’t get ahold of her. She lays on the ground with a bullet wound, the phone ringing beside her. Her voicemail comes on.

Eleven months later, her family is still reeling from her murder. Cordell returns home from his undercover work and visits him and Emily's spot at the lookout in Lady Park Lake. He remembers seeing her running toward the gazebo, turn around, and smile at him with breathing softly. Walker admits to Liam that he can't let certain thing about her death go, such as who closed her eyes as that felt personal, why she was holding a poker chip, and why she was killed in the first place. Liam advises him to let it go. Walker sees her again a few days later at night, when he is about to move into his parents farmhouse.

In Back in The Saddle, Walker tries to repair their family home when he remembers the day he and Emily had their children place their handprints in a concrete slab on the walkway. He also remembers her gifting him a new saddle and pouch that had their initials engraved on them. He finds it difficult to pass his horseback riding qualification for Ranger recertification because of the memories the pouch provokes. In the meantime, Stella mourns the loss of her mother by yelling at Walker, as he doesn't do any of things that mom did, nor was her there when she needed him. Walker learns that Geri closed Emily's eyes that night and the poker chip Emily had was part of a set that she planned to give Cordell for father's day. August continues his mother's love of photography by using old videos that she recorded of the family in his What Texas Means To Me project for school. Emily is seen with her family, smiling, laughing, talking, and engaging in a hose fight with her family. The day they put the kids handprint in the slab is also documented.

In Bobble Head, Cordell and Emily sit in her red mustang, with her assuring him that they’re ready for this big step. He drives forward a few feet then jerks to a stop, unable to drive a stick shift. She compares getting used to the stick shift as breaking a mustang, but he doesn’t want to break the car. He suggests going down to Side Step which she agrees with - as long as he drives. She puts a bobblehead on the dashboard. She states that he’s always smiling, with no judgment, and will put Cordell's mind at ease. He tries again and this time, he succeeds with much hesitation.

They wait in the parking lot of the bar, and Walker tells Emily to never leave him as he needs her encouraging voice to keep him going. Hoyt strolls past with Walker muttering that he’s probably hiding cards up his sleeves. Emily takes out the deed to the car as she wants to bet it for poker night as they’re broke. He refuses at first as he’s just starting to get attached to the car, which he references as her. He named her Stella, which she likes. It was the first name that came to Cordell's mind. He remarks they don’t need money but she notes that their family might. He realizes she’s pregnant and instantly begins listing things they’ll need. Even if they bet the car they can’t guarantee that Hoyt will play fair, so Emily suggests Walker keep an eye on him.

In Don't Fence Me In, Emily doesn't appear in flashback but is mentioned by Cordell, who talks to Abeline about her relationship with Bonham. When Abeline mentions that Bonham snores, Cordell emotionally remembers that she used to snore "like a bear cub". He becomes overwhelmed with emotion over the memory so Abeline embraces him.

In Duke, Liam confronts Texas Ranger Captain Larry James about pulling the drone footage from the night of Emily's murder. Liam had pulled it as well, confirming what they both already knew - something is off with her murder.

Emily was a beautiful woman who generated kindness and warmth to those around her. She was wise beyond her time, gentle, and free-spirited. She was strong-willed and dedicated to helping others and changing the world around her. She often served as her husband's anchor, his voice of reason and encouragement. She was patient with him and her children, with Stella remembering her as being an amazing mother. Emily's drive to help otherwise often put her in dangerous situations.

On April 8, Emily Walker and her best friend Geri Broussard went on their routine trip down to the border between Mexico and Texas to bring refugees water and supplies. The women were separated but Emily stayed true to the plans that she and Walker had mapped out, all of which avoided security camera and drone footage. She was following a truck that was carrying crates of what were believed to be supplies, when the truck hit a pot hole and the crates broke and a handful of illegal pills fell onto the ground. Emily recorded the entire incident on her phone which spooked the driver of the van, a woman named Cali who worked with the Northside Nation. Cali panicked and saw that Emily was the type of person to talk, and Emily tore off running to call her husband, Cordell Walker. While on the line with him, Cali shot Emily twice in the abdomen before fleeing the scene. Geri arrived moments later to find Emily's body, though she was too late to save her. Geri closed Emily's eyes. Her body was taken to the morgue where Cordell and Geri met Larry James, who took them to identify Emily's corpse. On her person was her wallet which hadn't been stolen, her cell phone, and a poker chip that had been part of a set Emily was planning to give Cordell for fathers day.

In the days that followed, all resources were honed in on the investigation of Emily's murder, since Cordell was a ranger at that time. They managed to track the evidence to a man named Carlos Mendoza, who confessed to the murder and was sentenced to serve life in prison. On April 10, Emily's true killer Cali attended a Northside Nation poker game where players bragged about murdering a Ranger's wife. More specifically, the leader of the gang Oswald made others believe he may have been responsible due to his erratic behavior. The Rangers closed their case until Larry James and Liam Walker reexamined the drone footage and began to look deeper, realizing that Carlos Mendoza was innocent and that someone was paying off his niece in exchange for him serving time in prison. Because Carlos was already dying of a physical condition, he had no qualms serving time for a crime he didn't commit. Geri, however, fell into debt with her business the Side Step and sought a loan from Northside Nation, specifically Oswald. In exchange for the loan they filtered money through the Side Step's LLC, money that they then paid to Carlos's niece in Mexico under the ruse of purchasing paintings from her art gallery.

With Emily's case officially re-opened and the Northside Nation the prime suspects, Walker and James worked alongside Geri to infiltrate a high-stakes poker game where they ultimately learned that Cali is Emily's true killer. Walker recognized the way Cali fiddled with her lighter, recalling having seen a woman doing that outside the morgue on April 8th. When they went to apprehend Cali she pulled a gun to shoot Cordell, when Geri arrived and shot her first. Cali died from the wounds and the rest of the Northside Nation were arrested for their respective crimes and criminal activities.

Stella (to Cordell about Emily): "Are you cooking Sunday supper? Oven on all day singing in the kitchen? Are you leaving books on my bed that are important to read and then making time with me to talk about them? Are you teaching August the guitar, are you taking us to the ranch to help birth a calf, or are you just gone?"

-- Back in The Saddle

Cordell: "I'll tell you what. Don't go anywhere on me because I need that voice. That make me feel like I can get through anything voice."

Emily: "Not all things have to be good for them to be good." 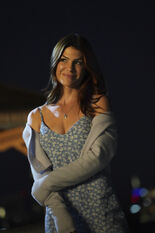