Tessa Blae
Four Stones in Hand is the fifteenth episode of the first season of The CW series Walker. It premiered on June 17, 2021.

WALKER TRIES TO HELP MICKI FORGIVE HER MOTHER - Micki's real mother, Mercedes, tries to make amends with her daughter but Micki doesn't want anything to do with her. Walker steps in to help and lands in a heap of trouble. Meanwhile, August suffers from PTSD after what happened at the Ranch.. 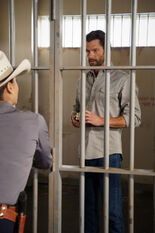