"Dear Team Sassy Boots, sorry you guys suck. I still love you and look forward to that drink one day soon, Michelle. Here's Emily's car back, Walker. It was always hers. Tell Geri I love her. Hoyt. PS- we always knew it would end this way."
―Hoyt's note to Walker and Micki[src]

Described as "Hill Country’s Han Solo” and a “Lonestar lothario”, Hoyt finds himself on the opposite side of the law from his pal Walker.

Hoyt Rawlins grew up in a rough family life full of criminals and derelicts. He never knew his mother but formed a close friendship with his childhood friend, Cordell Walker. He became family with Cordell's family, having a particularly close bond with Cordell's mother, Abeline. Hoyt was also friends with Emily, Cordell's wife, and the trio attended high school together. Hoyt was gifted at cards due to his ability to spot people's tells - and his cheating. It wasn't long until Hoyt was arrested for stealing, earning him a poor reputation with Bonham Walker and several others. After his release from jail, he continued to bounce around cities getting into assortments of trouble. He maintained a distant yet close relationship with Cordell's children Stella and August, with them affectionately calling him, "Uncle Hoyt".

Hoyt Rawlins is introduced as a studded stripper who wins over the largest gun smuggler in Texas inside a strip club. He spotted the Rangers truck outside and convinced Terreto to sneak out back, where he promptly stole the truck. He was caught on security footage which played at the Rangers Division. Through the footage, Cordell Walker identified Hoyt from the signature victory kick. Hoyt surprised Cordell back at the Walker ranch, where he and Cordell fought until Cordell realized it was Hoyt. He played coy about his involvement with Terreto, and reunited with Walker's mother, Abeline, who Hoyt was close with. The Walker family and Hoyt eat steaks that Hoyt brought, though the tension between Hoyt and Bonham was evident. As Hoyt explained his recent jobs and where he was at, which led Liam and Cordell to ask which prisons he was locked up in. When Hoyt made a comment to Stella about being an outlaw, Bonham angrily left the table to sulk in his bunkhouse. After dinner, Hoyt and Abeline made plans to go mushroom hunting. The following day, Hoyt showed Walker that he still kept Emily's red mustang that he won in poker years ago.

Next, they visited Hoyt's longtime on and off again girlfriend Geri Broussard at her bar, the Side Step. He proposed using a makeshift ring which she declined. Micki arrived later and arrested Hoyt for his attempt to bribe her with the purchase of a drink. Cordell protested the arrest since they couldn't prove Hoyt worked with Terreto. Micki gave him the truck manifest for Wagyu beef, the last raid that Terreto used, which happened to be the same steak that Hoyt brought to the Walker ranch. Micki managed to flip Hoyt and get him to tell them where the drop was scheduled, while he remarked on Cordell's upgrade in partner. His information, however, was faulty as he directed them to the wrong warehouse. Hoyt took this time to call Abeline to apologize for missing their mushroom hunt. She would never forget that he saved Cordell years ago. He called her a port in his storm, though she hoped he would find still waters one day. When Walker figured out where the drop really happened, the storage unit where Emily's mustang previously sat, he and the Rangers arrived and arrested Hoyt.

He went back to prison where he remained until Captain Larry James and DA Liam Walker came to visit. They informed him that Carlos Mendoza, the alleged killer of Emily, was in the same prison as Hoyt. They wanted him to spy on Carlos to see if he really murdered Emily, or was coerced into a false confession. Hoyt initially refused as he wanted revenge for Emily, but upon learning that he could get a reduced prison sentence and find her real murderer, he agreed. He was placed in the same cell with Carlos and, in less than a week, learned that Mendoza had a severe illness and a niece who owned an art gallery. The information he collected was enough to cast reasonable doubt on Carlos Mendoza's confession, and led to his release and the apprehension of Emily's real killer.

After a few more months, Hoyt was released from prison. A welcome back party was thrown in his honor at the Side Step, where he grandly called Geri his rock. During a conversation with Abeline at the Walker Ranch, he admitted that Geri deserved better than what he could give her. She gave him her wedding ring for her past marriage so he could properly propose to Geri. He went to Geri's apartment where he laid out plastic rings in the shape of a heart. He was on one knee when she emerged, and admitted that with her he has a reason to live - she makes him a better man. She blurted out that she kissed Cordell a few weeks ago, but he could move past it because he loved her. He asked if it meant more than just a kiss to her, but she wasn't sure, but knew it had to mean more to Hoyt. He told her that every time he proposed he meant it but she didn't take it seriously. They both want to change but weren't sure they could do it together. Hoyt, angry over the rejection and revelation, stormed out of the apartment to confront Cordell.

By the time Hoyt arrived, the Ranch had been taken hostage by Clint West and his gang of criminals. Hoyt was apprehended and tied up alongside the rest of the family. Clint realized Hoyt was the man that gave "Duke Culpepper" meat, the edge, and commended Cordell. As thing escalated, Clint finally revealed that he wanted Cordell to rob a bank alongside Hoyt. The partners were given an unloaded gun, Emily's red mustang, and one of Clint's men to tail them. If they failed to rob the bank, were caught, or tipped off the police, the Walker family would be killed. Hoyt and Cordell successfully robbed the bank as they pretended Cordell was a hostage and Hoyt the unhinged, yet charismatic, robber. While inside the bank, Hoyt managed to take possession of a security guards loaded gun.

Hoyt to James and Liam: “Is this some kind of a joke? You put me in a cell with the guy who killed Emily Walker, I will kill him.” 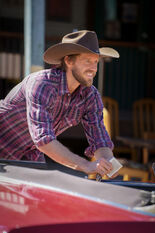 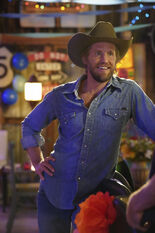 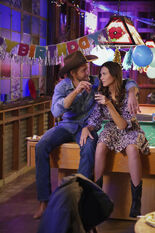