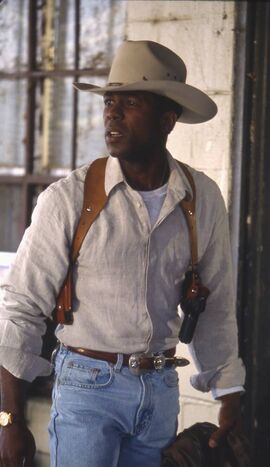 James "Jimmy" Trivette is the current partner to Cordell Walker of the Texas Rangers. Trivette is often made fun of by Walker and also looks for money-making opportunities wherever he goes. James grew up in Baltimore and got a football scholarship as a wide receiver, but seriously injured his shoulder which ended his career. Soon after, he joined the police force, starting first as a highway patrolman before graduating to Texas Ranger status.

James Trivette, commonly known as "Jimmy", is Walker's partner and the deurotagonist of the series.

He grew up in Baltimore, Maryland, and has an older brother named Simon, who appears in the episode "Brothers in Arms". As a young man he was a famous football player, and he was a member of the Dallas Cowboys until a shoulder injury ended his career. He later entered the Texas Rangers and became a colleague of Walker in the first episode of the series, "One Riot, One Ranger in Fort Worth". Trivette takes the place of Walker's old partner Bob Mobley who was killed during a robbery in the same episode. However, in the episode "Till Death Do Us Part", in which Walker ends up in a coma and his friends recall some of their greatest memories of him, it turns out their first meeting had taken place during a riot: while trying to calm the crowd, Trivette was ambushed and nearly killed, but was saved by his future partner. Walker's gruff character makes it difficult with their initial partnership, and Trivette is forced to work hard to gain his respect and trust, but they later become good friends. Trivette is very computer savvy, but sometimes mocks the fact that Walker knows more about him without the use of technology. Regarding C.D. Parker, he sometimes has some quarrels about his chili. but they are still good friends, with Trivette even giving him the nickname "Big Dog".

Trivette shows great professionalism and commitment to his work as a ranger, but being the partner of the protagonist, is generally less skilled than Walker, in highlighting the qualities of his partner; on several occasions he ends up injured and Walker is left complete his mission without him. Being quite touchy, he is sometimes the butt of jokes by Walker or CD or Alex, or is involuntarily involved in comic situations of various kinds. However, Trivette gets a bigger role in several episodes in which Walker is away with another case or other kind of business, and is the star of the episodes. He also had faced several legal problems, such as in "Trust No One" in which he is accused of having pocketed part of the spoils of a robbery, and in "The Hands of God", where he seemingly injured a little boy during a shootout, and in both cases, Walker never lost his faith in his partner, and Trivette is ultimately proven innocent at the end of both episodes.

Trivette is single most of the series, despite occasional romantic attachments in some episodes, such as "Behind the Badge" when he falls for a journalist, but she is forced to leave, or "Angel of Death" Trivette reconnects with Angell his girlfriend in high school, but finds that she is a killer. Angel is also killed at the end of the episode. In the last episode of the series, Trivette meets old girlfriend Erika (who previously appeared in the episode "Justice Delayed") and they decide to get married, despite some initial doubts when Trivette is nearly killed by the one of the motorcycle gang who marked him as a target.

James is a good-hearted person, with a sense of wrong and right, but does get carried away on his money-making exploits. He does have some fighting skill, but not on the same level as Cordell Walker or Trent Malloy. James is more of a boxer/brawler as he tends to punch and back-hand most of his opponents and never throws any noticeable kicks. He also has skills with computers, often specializing in data-collecting as he easily draws up profiles for wanted suspects during the Rangers' investigations. During the first couple of seasons, Jimmy was the "youngster"--the sort of "new kid teamed up with the old gun-slinger" as James was more hi-tech and modern-themed in contrast to Walker's "old western, eye-for-an-eye, trust-my-instincts" personality. Compared to Walker's "tough as nails" Dodge Ram pickup truck, Trivette drives more agile sports cars - in early episodes a red Pontiac Firebird, later a silver Dodge Stealth R/T and ultimately, a black Ford Mustang GT.

James could be described as a good cop, good friend, etc. but over time on the series, Trivette would embark on several character and plot-arcs that would noticeably change his direction in the series. James Trivette has often been a victim of bad relationships, often with him being unable to hang on to his potential matchups or otherwise just having a falling out with women. Because of this, Trivette has never had a solid relationship (until the later seasons of the series, 2000 & 2001). His more high-profile matches during the series included once dating a woman who was hired a killer. She came back into his life in a sort of cat-and-mouse chase as Trivette struggled with his policeman's duty and his personal feelings for her. In the end, she eventually died in his arms by the episode's conclusion. Trivette has successfully developed a relationship with a young college student named Erika Carter (played by http://www.imdb.com/name/nm0870206/ Tammy Townsend) who he helped in the episode "Justice Delayed". Agreeing to help Erika, led Trivette on a quest to prove her father's innocence in a crime he didn't commit some years earlier. James and Erika reunited (on-screen) in the last two episodes of the series finale wherein they joined Walker and Alex's family/friend picnic at Walker's ranch.

Trivette has also been the victim of racial prejudice, personal vendettas and media conspiracies which brought out ugly and otherwise embarrassing sides of Trivette's persona which usually did not help his cause during these situations. When he first thought he shot a young boy during a night-time gunfight, Trivette took an emotional dive which caused him to drink a lot, fight in bars and simply just become a miserable human being in his own self-pity and loathing. It took Walker to help James Trivette retrace his actions during the scene of the gunfight to realize he never shot the boy. However, he almost got shot by the boy's brother who foolishly accused Trivette of murdering his brother. After a heartfelt speech, James talked his way out of eating a bullet and broke through to the older brother's common sense and morality.

The issue of racial prejudice came in an episode where a news station headed by a black reporter and supported by her husband was targeted by a white supremacy militant group. Trivette was boiling during the course of the episode, (due to the group being responsible for his cousin's murder) and even was tempted to kill one of the supremacy members, who had committed the murder, during a fight, he and Walker were involved in before the news station takeover. Ultimately Trivette and Walker defused the hostage situation and subdue the militant group, saving dozens of lives both white and black, including Alex Cahill who was scheduled to make an interview appearance before the station takeover.

James has had his battles with the media as well, including accusations in one of the episodes of him stealing money from a crime scene that involved a drug money bust he and Walker were on. When James confronted the studio reporter about the accusations, he was secretly recorded on camera, providing the medial mogul the material he needed to twist Trivette's words into a threat against the news anchor. Eventually, Trivette was able to clear his name but his conduct during the course of the episode depicted him as foolish and brash, totally steering away from his usual good-natured and much-smarter self.

Trivette's family relationships have also seen some strains: His older brother Simon, a semi-crippled former FBI Agent, became an informant for a crime syndicate (which cost him his FBI career and 18 months to prison) and later an important member of an international Drug Trafficking Ring, based outside the Dallas-Ft. Worth area; their relations came to a breaking point when Simon was assigned to assassinate both Jimmy and Walker. Jimmy's relationship with his mother grew stronger, after his brother's incarceration, however, it ended, sadly, when she died after having suffered a stroke, to which Jimmy attributed to his brother's fall from grace.

During the course of the series, James Trivette teamed up more with the rookie rangers Sydney Cooke and Francis Gage as Walker virtually "withdrew" from actively participating in investigations to focus more on his home life with Alex. Thus James became the "lead" in the roster of rangers patrolling Dallas. And while Trivette advanced to this take-charge status, he still acted more in the role of a comical, easy-going sort.