Captain of the Texas Rangers

1.01 Pilot
Larry James is one of the main characters on The CW crime drama series, Walker. He is the Captain of the the Texas Rangers division.

The CW's official character description: "a Texas Ranger Captain, a trailblazer in his division, confident, sharp as a razor. Captain James, as the only African American man in the Austin headquarters and one of only a few in the entire Ranger division, has true grit and a wry sense of humor."[1]

Larry James was once the ambitious partner of Cordell Walker, and the pair brought down dozens of criminals. His positive record, paired with Cordell's sudden undercover assignment, helped Larry be promoted to Ranger Captain. He kept a positive friendship with Liam, Cordell's younger brother, and often saw Cordell's children.

In Pilot, the Walker family and friends gather for Cordell’s anticipated return. Larry asks if Liam has heard from Walker but he hasn’t, but wonders if he knows his old partner is his new boss. A truck drives up but it isn’t Walker, much to August and Stella’s disappointment. Stan Morrison greets the children before heading inside. Liam guesses that Cordell is on the lookout in Lady Park Lake, as it used to be Cordell and Emily’s place. Larry sends a patrol car to check on the lookout.

Walker heads to work where he greets Larry James, his former partner who is now his Captain. James remarks on how he had to eat several slices of pie and listen to Stan Morrison ramble about Walker’s greatness for an hour last night, with Walker teasing him about it and his promotion. They clasp hands as Walker explains he just needed a minute to pull himself together. He then asks what the case is about. James explains that an officer was attacked when he pulled over for roadside assistance, though he isn’t talking as he’s called in his union rep. Ranger Micki Ramirez remarks that something spooked him, as James elaborates that because an officer was attacked they called in the Rangers. He introduces Micki who is Cordell’s new partner, and the officer who drove him home last night. James notes that Walker just closed the Rodeo Kings case, to which she goes to ask him a question but Walker shoots her down as he doesn’t want to talk about it. James tells her to fill Walker in on where she’s at and walks off. Walker notes that he has some catching up to do.

A few days later, the partners visit Captain James' office to brief him about their arrest. James tells them that by taking down Clark’s ring, they unearthed a bigger link to the cartel. He offers Walker a job with a task force effectively immediately. Walker is honored though he has to think about it. James then tells Walker the way he handled the suspects earlier won’t be tolerated and created an unneeded mess. He tells Walker to do better.

In Back in The Saddle, The Texas Rangers investigate a fire that resulted in the deaths of the stablehand, Matt Harmon, and prized racehorse Texas Nightshade. James is talking to Mr. Manchester, the owner of the stable. Mr. Manchester and Jed tell the rangers about Matt’s life while Jed thinks they should talk to Dan Hutchinson, the man who lost a bid on Texas Nightshade. As they walk away, James criticizes Walker for not shaving, not calling him Captain and their reform which means wearing a white hat. He didn’t call Walker to the scene because he needs to be recertified as a Ranger. Until he passes he isn’t allowed on the field.

Walker protests in the office but James isn’t interested in having the discussion. He wants to make real change with his term in office and doesn’t have time to deal with Walker pissing him off. He brings up Walker looking at the footage from the border control beacons the night Emily died. Walker sits to explain as he fiddles with the poker chip, as he doesn’t think he gave himself enough time to think about the case. James knows the case is solved but Walker is worried they got something wrong. James apologizes for putting Walker on the Rodeo Kings case but he has to be stable on the job.

A few days later, Micki and James pursue Manchester on his private airstrip and they exchange fire with the Rangers tire being shot. Cordell rides up on Texas Nightshade and James shouts that he’s certified, as Walker grabs Micki and pulls her onto the horse so they can pursue the criminals. She dismounts into the car and apprehends them.

In Bobble Head, at the ranger station, James gives the Rangers a run-down of Torreto’s operation. They lost eyes on her earlier that morning but she’ll be in town for another 36 hours before she picks up the weapons. They don’t have much intel on Terreto but are aware of one known associate, showing a video of a male stripper doing a victory kick moments before stealing Micki’s truck. He asks if Micki and Cordell know the make and model of the car Terreto and the stripper stole, to which Micki admits that it was her truck. The Rangers and officers around them snicker but Cordell takes responsibility for the incident. James instructs them to find Terreto, Micki’s truck, and find out who the naked cowboy is.

Micki visits Captain James to ask for his help as one of Walker’s friends is involved in the investigation. James figured out that it was Hoyt Rawlins based on the profile of the theft and eventual return. They can’t pin anything on Hoyt and instructs Micki to keep an eye on Walker, Terreto, and Hoyt. He figures that Walker is hanging out with Hoyt, gathering intel, convincing himself he isn’t crossing the line. He suggests that Micki convince him otherwise. He then tells her about a delivery truck that was stolen last night that he believes is linked to Torreto. He gives the manifest to Micki, who realizes that the delivery truck was stolen at four-am and her truck theft was merely Hoyt’s audition. James takes a call from Walker, listens to his rambling, reminds him it’s “Captain James”, then hangs up. He tells Micki that Walker won’t be in today as he’s gathering intel from a CI. He suggests she go to the Side Step for surveillance.

The next day, the Rangers and police prepare to breach a warehouse, but no one has eyes on Terreto. Cordell doesn’t think this is right and believes that Hoyt played them. James instructs Micki and Cordell to take a closer look. When they breach the building all that remains inside is Emily’s red mustang and note on the windshield. Cordell tells James that they don’t have anything. Cordell realizes where Hoyt may have taken the operation. Terreto’s crew loads the weapons as the police speed up to the building. The crew grab machine guns and point at the Rangers, while James announces their station and demands they drop the weapons. A shootout begins as Cordell and Micki fire back at the crew, while Hoyt dives under a truck to avoid the fire. One by one the crew members fall until the Rangers are able to move in, making numerous arrests, including Terreto’s.

In Don't Fence Me In, a press conference is held for Sheriff Monty Shaw to celebrate the apprehension of a gang member named Enzo. Captain James and Micki talk about the oddity of the gang members being involved in the oil field as it isn’t usually their style. He ushers her to the stage where James praises her for her involvement in apprehending the suspect. Micki asks about a woman staring at them, who James explains is the perp's daughter, Delia.

At the station, Cordell tells James that they aren’t sure Enzo killed Bob Harlan. Micki tells them that the seating chart gives her as sitting alone, not with Bob. Cordell asks Connie to access the plant cam at the Harlan botanical gardens, which she does with ease due to her hacking abilities. The camera feed catches Mrs. Harlan and Monty Shaw, with Micki wondering if they conspired to kill Enzo. James reluctantly agrees to let them talk to the Sheriff.

That night, the Rangers and James celebrate Micki’s win with him approving of her antics. He also assures Micki that what happened to Enzo wasn’t her fault, as the autopsy confirmed that Monty shot Enzo who tried to defend himself when Monty hit him in the head with his gun. He was merely spooked by the Rangers vehicle but the head trauma was already suffered. Walker chimes in that Harlan’s estate goes to Delia, Enzo’s daughter instead. James gives them barbeque from Micki’s favorite place, per Walker’s intel.

Across town, Liam learns that Captain James pulled the surveillance logs from the night Emily died despite telling Cordell to drop the case. 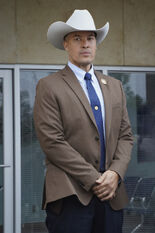 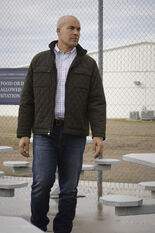