Micki
Lindsey Morgan is an American Actress who portrays Micki on The CW's reboot of Walker, Texas Ranger, which is titled Walker.

Prior to Walker, Morgan is largely known for her role as Raven Reyes in another CW series, The 100.

Lindsey was born in Texas to Kelly Morgan and Alice Burciaga. She is half-Mexican and half-Irish. She has one half-sister and five step-siblings. She became engaged to actor Shaun Sipos during Christmas of 2020. 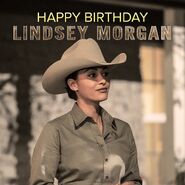