"In the eyes of a ranger, the unsuspecting stranger had better know the truth of wrong from right. 'Cause the eyes of a ranger are upon you, any wrong you do, he's gonna see. When you're in Texas, look behind you, 'cause that's where the ranger's gonna be."
―Cordell Walker (1993)[src]

The Texas Rangers are an elite law enforcement agency in Texas. They investigate a plethora of crimes ranging from drug arrests, officer assaults, and murder. They work from the Texas Department of Public Safety under the Texas Rangers division.

In Pilot, Larry James is promoted to Captain over the Rangers division in Austin, Texas. His former partner Cordell Walker returns from his undercover assignment after closing the Rodeo Kings Case. Cordell returns to work where he is given a new partner, Ranger Micki Ramirez, who was recently promoted from state trooper. Their first case together is to solve the attack on Sgt. Curtis while he tried to offer roadside assistance. The case is relatively simple as they easily figure out the assailants truck comes from Green Thumb & Grace criminal rehabilitation center. They arrest two adults Jordan and Alex on suspicion, though Jordan is also arrested for attacking Cordell. Cordell and Micki discover that the figurines Green Thumb & Grace are selling are packed with plastic bags of heroin. When they return to the institution, the brains behind the operation is revealed to be Cheryl Clark, the owners sister. Cordell and Micki work together to arrest him. With the case closed, James informs the partners that that by taking down Clark’s ring, they unearthed a bigger link to the cartel. He offers Walker a job with a task force effectively immediately. Walker ultimately turns the job down, opting to stay in Austin with his family.

In Back in The Saddle, Cordell is up for his two-year recertification to be a Texas Ranger. He goes through a series of tests including driving a car through an obstacle course, target shooting, and riding a horse. He struggles to pass his final course, while Micki is assigned to investigate a suspicious fire in which a man and a racehorse died. Despite not being an official Ranger, Walker lends a hand in the investigation. The Rangers learn that the owner of the stables, Manchester, set the fire on purpose to collect the insurance money that came from Texas Nightshade's death. However, the jockey Jed was in on the scam and couldn't go through with killing the horse, so he set the thoroughbred free. Walker tracks Texas Nightshade through the woods, while Micki and Captain James try to apprehend Manchester before he can board his private jet. The trio succeed in capturing Manchester and Jed, and since Walker rode Texas Nightshade in the field he is officially certified for another two years.

In Bobble Head, Cordell and Micki investigate a weapons smuggling ring run by Sharon Terreto. They stakeout a strip club that Terreto went into, though when they enter the club themselves she managed to escape with the help of a male stripper. They also stole Micki's truck. They are able to track the male stripped to Walker's childhood friend, identifying him as Hoyt Rawlins. Micki and Walker track Hoyt and Terreto to a warehouse, where a shootout ensues followed by a series of arrests that includes Terreto and Rawlins.

In Don't Fence Me In, Micki states that there is a total of 164 Texas Rangers, the majority of which are white men, and she is the only Latina.

In Duke, Walker is forced back undercover as "Duke Culpepper" when his former undercover group the Rodeo Kings appear in Austin. Micki meets with Captain James, DA Liam Walker, and FBI agent Tessa Graves. The meeting is in regards to Walker’s undercover assignment, “Operation: Watch the Throne”. Agent Graves is disgruntled that the op took Walker 10-months to complete. Larry explains that out of a 92-person traveling rodeo, Walker was tasked with identifying who was connected to the Rodeo Kings operation. He successfully identified four people, Clint West the show horse, Crystal West the wheelwoman, Jaxon Davis who had broken his leg which Walker used as his in, and Twyla Jean the banker who helped navigate the heists. Liam didn’t want to put Cordell on the stand to testify against her, as that would put the entire Walker family at risk, so Twyla was released. On the last Rodeo Kings job, 300K disappeared with Graves implying that Walker stole it as he was the last to see it. She shares Cordell's text message to Twyla recently, unaware that the message was sent by Walker's curious son.

To help clear Walker's name, Micki goes undercover and joins the Rodeo Kings as they plan to rob another bank. Liam, however, remembers Walker begging him to make the arrests early as Clint and Crystal will go down shooting which will result in death. Liam refused as they didn't have enough evidence to put them away for life, though Walker wound up being right in the end as the bust did go wrong with Crystal getting away with the 300k. In the present, Twyla turns on the group and makes a run for the 300k that Walker deduces is hidden in the jukebox. Texas Rangers and Agent Graves arrive and successfully arrest Twyla, though Walker continues to run and points a gun at Agent Graves. She shoots him in the chest and he falls into the pool, forcing Twyla to believe Duke is dead. Walker emerges a few moments later as Liam assures him that "Duke Culpepper" is officially dead, and that no one will come looking for him again. Agents Graves clears Walker for now but assures him that she is watching is movements.

In Tracks, Walker and Micki lead a private investigation into the hit-and-run allegedly committed by Micki's mother, Adriana Ramirez. The case is cut short when Walker is called away to Laredo when his kids sneak out to attend an underground soccer match. He and Micki arrive just in time to save the Sacred Heart High students from the Northside Nation gang. They make several arrests and Micki engages in a shootout with some of the members. They escort to the criminals back to the Laredo police department, where Walker remarks on having previously taken down a faction of Northside Nation in Austin.

In Freedom, Hoyt Rawlins is released from prison while Clint West and Jaxon Davis escape police custody during a transport. The Rangers are called in to investigate the escaping and find the fugitives. They learn that Clint might be in pursuit of his son, Trevor Strand, which surprised Walker as his daughter was dating Trevor. They tracked the duo to a cabin a few hours away, but only managed to apprehend Jaxon. They saved Stella and Trevor from Jaxon and Clint's goons, though Clint escaped into the night.

In Defend The Ranch, Walker and Hoyt are held hostage with the Walker family at their Ranch by escaped convict Clint West. Clint blackmailed Walker and Hoyt into robbing a bank, which they did under the rouse of Cordell being Hoyt's hostage. They sped away and outran the police and Rangers, though Micki found them on the bridge. He revealed the truth to Micki and she let them leave to protect the rest of the family. She followed them from a great distance but heard a gunshot so she called in backup. By the time everyone arrived, Liam Walker had shot and killed Clint West, Hoyt Rawlins had died, and Micki held onto Trevor Strand after she talked him down form shooting Cordell or Clint. The ramifications of the incident were evident, as Cordell missed his DPS hearing. Captain James was forced to suspend Walker for two weeks without pay, which Cordell knew was wrong. He remarked that they have to change - he has to change, but he isn't sure it can be done with the badge. He turns it over to James and leaves the building.

This undercover operation is known as "Operation: Watch the Throne" and involved the takedown of the four-person Rodeo Kings crew. The Rodeo Kings were a high-profile group of bank robbers based in San Antonio, Texas. They were members of a 92-person traveling rodeo who worked together to pull off bank heists. They remained virtually undetected due to the large rodeo they traveled in. As a result of the Texas Rangers inability to identify the four robbers, they placed Cordell Walker undercover to infiltrate the group and identify them. The original members of the group included their leader Clint West, his wife and the groups wheelwoman Crystal West, Jaxon Davis, and banker Twyla Jean.

Jaxon's broken leg provided a way in for Walker, who assumed the undercover alias of Duke Culpepper. The operation was overseen by Cordell's than-partner Larry James and FBI agent Tessa Graves. Liam Walker served as legal counsel for the case. The case took ten-months to complete, with Cordell often going dark for long periods of time only to resurface without much of a breakthrough. This made Graves suspicious that Walker had gone dark. One night, Cordell begged Liam to arrest the gang prematurely, but Liam refused as they wouldn't have enough evidence to convict. The bank robbery the next day turned fatal, with Clint and Crystal following through on their promise to go down shooting. Crystal was severely wounded so Cordell helped her to a car in the back lot, where she escaped with their $300,000 bounty. Crystal and the money were never seen again. Clint presumably died in the bank after being shot multiple times by authorities.

"Duke Culpepper" was placed in jail which retired Cordell's undercover life and allowed him to return home. Liam refused to allow Cordell to testify against Twyla, as it would blow his cover and place the entire Walker family in danger. As a result, Twyla served little if no jail time. A few months later, Cordell was pulled back into his undercover alias and unwillingly rejoined the crew. Agent Graves returned believing now more than ever that Cordell was dirty and reunited with Twyla to secure to the 300K and leave town. Newest Ranger Micki Ramirez and Larry James, now Ranger Captain, were insistent of Cordell's innocence. To prove Cordell's innocence, Micki went undercover as Adriana, an old friend of Duke's. She quickly became the Rodeo Kings new wheelwoman.

Twyla ultimately betrayed the newly formed group to make a play for the money alone. Cordell was able to stop her in time for the Rangers and FBI to arrive. Twyla was arrested while Duke was fatally shot by Agent Graves. With the final members of the Rodeo Kings arrested, as Jaxon was rendered unconscious by Twyla earlier that day, and Cordell's undercover alias officially deceased, the Rangers were able to close the case.

Texas Rangers are a legitimate branch of law enforcement that does exist, and as such, the following information are real facts about the Rangers, courtesy of Texas Hill Country. 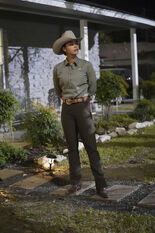 The Rangers in the 1993 series
Community content is available under CC-BY-SA unless otherwise noted.
Advertisement