Don't Fence Me In

"I would never do that, Stel. The way I grew up, I didn't even know if I could love someone, let alone someone as good as you. I wouldn't ruin that for anything."
―Trevor to Stella[src]

Trevor was born to Clint and Crystal circa 2003/2004 he was born while the latter was still a teenager. However instead of taking on the responsibilities of parenthood they left Trevor in his aunt Harriet's care who provided them with updates on his milestones such as his first time walking as they couldn't leave the rush of criminal lifestyle behind. Eventually he applied an ranch hand at the place where his father was serving his community service after getting arrested.

In Don't Fence Me In, at the barn for community service, Stella joins Bel just as Vern gives her the mucking job. He introduces her to their newest hire, Trevor, who gives her equipment and takes the rest of the group to the paddock for their assignments. Stella visits the stable the next day and is given a horse to brush by Vern. Trevor approaches just as a horse kicks down a gate and escapes. Stella mounts Sunny, a horse, and rides after the escaped horse with Trevor following closely on another horse. Stella and Trevor walk the horse to the stable and she asks his advice on how to help her friend. He admits that he has the job only to be close to his imprisoned father. He advises that while she can’t change what happened, but not to pretend it didn’t as that won’t help any. She thanks him for his help. In the stable, she overhears Cordell and pulls Trevor into a stall to avoid her father who is checking in on her. She tells Trevor that her dad is a Texas Ranger, and he smirks saying that she has the tougher father. That night, Trevor follows Stella on Instagram, much to her glee.

In Bar None, TBA

In Tracks, Trevor and Stella text back-and-forth in the hours leading up to their away soccer game, as he took a position as the teams water boy. As the bus is loaded with gear, she nervously texts him as he's late. Coach Bobby calls to the team to board the bus, just as Trevor pulls up and greets Stella. She asks why he's late and he remembers meeting with his father at the prison, as Clint wanted revenge on Duke for killing Trevor’s mother. In the present, Trevor brushes it off as nothing and is ready to go. At the hotel, the students enter the hotel while Trey hands out forms to the students. Trevor and August talk about Stella which August is fine with, but asks for his advice on how to get a girl to like him. Todd intervenes, much to Trevor's annoyance, and teaches them the UV-13 method, wanting them to find the right lighting at 42 degrees and walk 13% slower. August rejects the idea as he doesn’t want to be someone he isn’t.

As they settle in at the hotel, Stella tells Trevor about “Thirsty Balls” an underground keg scrimmage that is held each year. He zones out while she’s talking but assures her that he wants to be there, though he had a weird talk with his dad and he got under his skin and in his head. The only reason he came to Texas was to be close to his dad, but he wants to be far away at the same time. She understands but tells Trevor not to leave just because of his dad. It’s not their job to inherit their father’s baggage. At the event, Trevor witnesses August being himself around Ruby as opposed to trying Todd's 42 degree method. Trevor compliments August on being himself to which he admits it’s hard to get the 42 degrees on a cloudy day.

At Thirsty Balls, Trevor and August cheer on Stella until several trucks arrive and drive circles around the girls. Trevor tosses his cup aside and stands in front of the girls to tell the men they were about to leave. The men inform them that this is Southside Nation land but yet, they didn’t get an invite to the party so he demands a payment fee. Trevor informs the older man they don’t have money to pay with but the man ogles Stella and Ruby, saying they have plenty to pay with, to which Trevor insults the man. He proposes playing for the fee, and if one of them can score on him they’ll leave. Stella volunteers against Trevor’s objections. When she kicks the ball toward the goal one of the men shoots the ball. Trevor charges the man and tackles him, knocking the gun to the ground while Stella and August shout for him and the man to stop fighting. The fight continues until the gang members pull guns and aim at Trevor.

Walker speeds to the scene where Walker tackles one of the men, while Trey shouts for the students to hide behind the dunes. Micki engages in a shootout with the gang members, while Trevor stands by and Walker fights another member. Trevor picks up the fallen gun while Walker apprehends the gang member. He points the gun at Walker and calls him Duke, causing him to look up in surprise. Trevor ultimately gives the gun to Walker who yells at him to get behind the dunes.

Trevor, Stella, and August take Bel to a field where fireworks go off with a text from her parents telling her to look-up. August and Bel set off the fireworks while Trevor and Stella talked about what just happened. She tells him to go to the dance with her unless he’s leaving Texas. He assures her that he has a reason to stay and kisses her cheek.

The next day, Stella and Bel play soccer while Trevor and August watch. Walker takes a seat on the bleachers but calls Trevor over to talk. He thanks Trevor for what he did for his kids as it took guts, but Trevor thanks him for saving their lives. Walker calls him brave for standing up to the man but Trevor doesn’t see it that way as he had the shot but couldn’t take it. Walker points out the bravery in not shooting as it would have changed his life forever, and Walker doesn’t wish that on anyone especially someone young like Trevor. Before he leaves, Walker promises him a “what are your intentions with my daughter” chat for a later date, and shakes his hand. Trevor returns to his waterboy duties.

Trevor is a kind-hearted teenager who is hardworking, driven, and humorous. He is brave and doesn't hesitate to stand up for those he cares about, leaping into action to save Stella, August, and the other Sacred Heart High students at the risk of his safety. He does battle with a fundamental desire to please his criminal father, and battles with his moral compass over whether or not to enact his fathers revenge on Walker for the death of Trevor's mother. 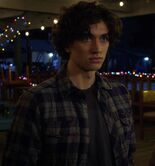