1.01 Pilot
Trey Barnett is one of the main characters on The CW crime drama series, Walker.

Warm and loving but haunted, Trey is Micki’s boyfriend. An Army medic recently back from his deployment, he’s doing his best to adjust but it’s not easy. He has a good relationship with Micki; they keep each other honest and know each other better than they let anyone else know them.[1]

Trey is an army medic from the 68 Whiskey division, having served out of Camp Lemonnier in the North Horn of Africa. He eventually began a relationship with fellow army officer Micki Ramirez.

In Pilot, Micki comes home to find Trey’s duffle bag on the floor. The two reunite with a hug and a kiss, as he’s staying for two-weeks. He wants to know one thing about her day to which she explains that her new partner is a mess. He served as a marine after 9/11 and he recently lost his wife. She’s trying to understand him but Trey wants her to be in the present. They begin to flirt over Micki’s new buckle.

Micki brings Walker to her house where she criticizes his handling of the situation while trying to find something to bandage his wound. Trey emerges from the kitchen and she introduces the two men, with Trey recommending more than antiseptic. She goes with Trey’s recommendation as he’s a medic, not her. Walker tries to justify his actions but his antics don’t entertain her. Trey returns and bandages his hand while Micki chews Walker out, with Walker making quick remarks back, much to Trey’s amusement. Micki storms out to return to work, while Walker receives a call from Stella’s school. Trey gives him a reassuring pat on the arm.

In Back in The Saddle, Micki and Trey kiss on her bed but a call from Captain James distracts her much to his chagrin. She is called into work despite his protests and tries to call Cordell but he doesn’t answer. She gets dressed though she notices he brought a lot of gear with him, he dismisses it as him having a longer leave. He wants to spend it with her but she is apprehensive as he’s never stayed for more than a few nights. She needs to focus on her job with him teasing that he’s a distraction.

Trey makes dinner for Micki who apologizes for not telling him how happy she is to have him around now. She’s scared that she won’t get her job or this right, though she wants to get their relationship right. He does too and tells her that he’s not going to re-up as he wants to figure out what’s next. She inspired him to make a change which she finds cheesy.

In Don't Fence Me In, Trey tries to get Micki to take a break but she is still struggling with the photo op. She feels like the token Mexican good guy used to take down the Mexican bad guy. He sympathizes with her but reminds her that a little girl might be inspired by her to become a cop. Micki explains her crime scene board to Trey, which he is supportive of. He has an interview for a new job lined up but she is distracted. She checks the database to see that Enzo’s gang activity dropped off in the ’90s but she isn’t sure if she should bring up the inconsistency as Monty is a legend. Trey assures her to take her shot. He then sees her sketchbook filled with superhero comics that she drew.

That night, Trey appears to Micki with a towel around his neck. He gives her the comic he found that Micki drew and is impressed by her talent. He has a job interview that afternoon. Her case isn’t going well but she suddenly has a breakthrough and leaves. The next afternoon, Cordell has more information on Micki's likes and dislikes leading her to realize that he called Trey.

Micki returns home to find Trey shirtless in the towel-cape. She hugs him which he claims is part of his superpowers. She assures him everything is fine and is grateful for his help with the case. She asks about his interview for the position, Director of Sports Medicine and Assistant soccer coach at Sacred Heart High. She is thrilled for him and asks for all the details. He gives her a present, which is a framed image of her comic book sketch.

Trey (about Cordell): "All right, Trouble."

Trey (to Micki): "You needed a hero so you created one. Then you became one. Don't forget that." 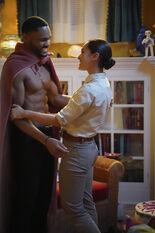 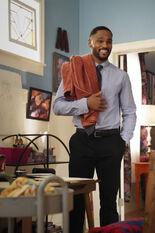 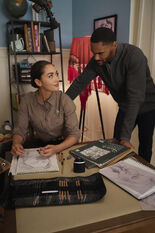 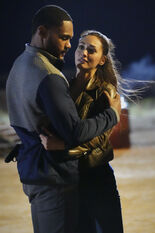