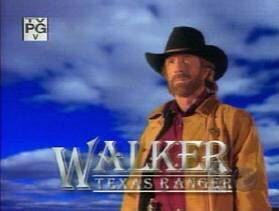 Walker, Texas Ranger is an American action crime television series created by Leslie Greif and Paul Haggis. It was inspired by the film Lone Wolf McQuade, with both this series and that film starring Chuck Norris as a member of the Texas Ranger Division. The series aired on CBS in the spring of 1993, with the first season consisting of three pilot episodes. Eight full seasons followed with new episodes airing from September 25, 1993, to May 19, 2001, and reruns continuing until July 28, 2001. It has been broadcast in over 100 countries and has since spawned a 2005 made-for-television movie entitled Trial By Fire. The movie ended on a cliffhanger, which was never resolved. DVD sets of all seasons have been released (with the three pilots packaged with the first regular season). Others have spawned the spin-off series Sons of Thunder, crossover episodes with Marshal Law and a made-for-tv movie.

The show was known for its moral values. For example, the characters refrained from the use of drugs, and they participated in community service. Martial arts were shown prominently as the primary tool of law enforcement and occasionally as a tool for Walker and company to reach out to the community.

The show has gained a following for its camp appeal, thanks largely to its improbable combination of martial arts and modern Western genres, and to the resurgent popularity of its star, Chuck Norris.

CBS broadcast the television movie Walker, Texas Ranger: Trial by Fire, produced by Paramount Network Television (now CBS Television Studios), on October 16, 2005. Chuck Norris, Sheree J. Wilson and Judson Mills reprised their roles, and Clarence Gilyard shot a cameo for the movie but was not featured due to the filming's conflict with a long-planned family vacation. To fill the void, Judson Mills, who was not in the original script, returned to reprise the role of Francis Gage. Nia Peeples, who played the role of Sydney Cooke for Seasons 7 and 8, was also not featured in Walker's return to prime-time television. The explanation given was that producers decided not to follow much of the original Walker Texas Ranger series, as to give the movie a fresh look. Even the show's original opening credits with the theme "Eyes of a Ranger" performed by Chuck Norris, was absent from the TV movie.

Although the return of Walker Texas Ranger did not garner the ratings CBS had hoped for, indications were that CBS was green-lighting future Walker Texas Ranger "movie of the week" projects. But as of spring 2006, both CBS and the Norris camp have been silent as to the future of the franchise, leaving many to wonder if it will return. Trial by Fire ended with Sheree J. Wilson's character the victim of a courthouse shooting, leaving many viewers to believe that there would be a follow-up movie.

When they announced their fall 2006 prime-time schedule, CBS said that they would no longer be producing "Sunday Night Movie of the Week" projects, which severely impaired any hopes of Walker's return to television in the foreseeable future. On May 15, 2007, CBS announced its fall line-up, but this did not include the return of the "Sunday Night Movie of the Week." In June 2018, cast members Clarence Gilyard and Sheree J. Wilson expressed interest in reprising their roles in a potential revival of the series, particularly to address the cliffhanger at the end of the post-series film.

Most episodes were based on true stories. A short-lived series, Sons of Thunder, featured recurring character Carlos Sandoval, who resigns from his post with the Dallas police and teams up with childhood friend Trent Malloy (a protégé of Walker's), to start a private investigation firm.

In September 2019, it was announced that a reboot of the series titled Walker was in development at CBS Television Studios from writer Anna Fricke, with Texas native Jared Padalecki attached to star. Fricke and Padalecki are also set to executive produce the project alongside Dan Lin and Lindsey Libertore from their production company Rideback, as well as Dan Spilo of Industry Entertainment. The CW, home of Padalecki's long-running series Supernatural, emerged as a leading contender to air the series in addition to CBS, which aired the original series. Like the original, the reboot, in which Walker would get a female partner, would explore morality, family, and rediscovering our lost common ground.

The show has garnered a particular cult appreciation among Conan O'Brien fans, from one of his most popular segments called the "Walker Texas Ranger Lever". He explained since NBC had recently purchased Universal, he could now show clips from Walker Texas Ranger without having to pay any money. The joke was that he would pull a giant red lever, causing a random and comically awkward scene to play. Random scenes included Walker jumping out of a plane and punching a woman in the face, or being shot in the back while proposing, or Haley Joel Osment playing a boy who is first meeting the rest of Walker's friends, and suddenly interjects "Walker told me I have AIDS". Conan would go on to riff at the bizarre nature of the scene out of context. He did this primarily on Late Night With Conan O'Brien, which prompted the show's star, Chuck Norris in character as Walker, to make a surprise guest appearance by acting out a skit in parody of the action scenes from Walker, Texas Ranger.

In May 1994, television critic Doug Nye wrote "Television Critic Confesses a Love for 'Walker, Texas Ranger.'" He praised WTR, saying, "Chuck Norris is Walker, a character not unlike those he portrayed in such films as 'Missing in Action' and 'The Delta Force.' He's one of those old-fashioned heroes who believes in justice and fights evil because his code of honor says it's the right thing to do...'Walker, Texas Ranger' is the closest thing these days to an old-time Western. Chuck Norris and company have made Saturday nights at 9 on CBS the most entertaining since James Arness and 'Gunsmoke' occupied that time slot more than 20 years ago. For this critic, anyway."

In October 1993, Ken Tucker of Entertainment Weekly gave the series a C+.

Television critic "Average Joe" Queenan wrote Touched by a Ranger, a semi-humorous roast of the series for TV Guide. He denounced WTR as "Corny and predictable...With plotlines that were old when George Burns was young, music that's basically a lethal fusion of the Batman and Mannix scores, acting that makes William Shatner seem like Marlon Brando, and dialogue that could stop The Dukes of Hazzard dead in its tracks, Walker Texas Ranger is a throwback to an innocent era when producers assumed that everybody watching television was dumb...I'm not sure they're even using a DP; it seems as if they just mount a camera on a tripod, and tell Chuck Norris to start kicking people's faces in for a solid hour...There's a lot of slow-motion during the fight scenes, so that you can see the predictably-incompetent drug-dealers getting kicked in the face from various angles; such is a bad idea, since Walker Texas Ranger already seems to be in slow-motion...Although the series is all but unwatchable, it does have one redeeming quality: Most of the episodes are scripted so that Chuck Norris doesn't need to talk much.

Paramount Pictures and CBS have both released all seasons on DVD in Region 1. The Complete 1st Season contains the three pilot episodes and the first full season being labeled as just the first season. This has confused some fans, as the episodes are wrongly numbered. Seasons 1–6 have been released in regions 2–4.

On May 12, 2015, CBS DVD released Walker, Texas Ranger- The Complete Collection on DVD in Region 1.